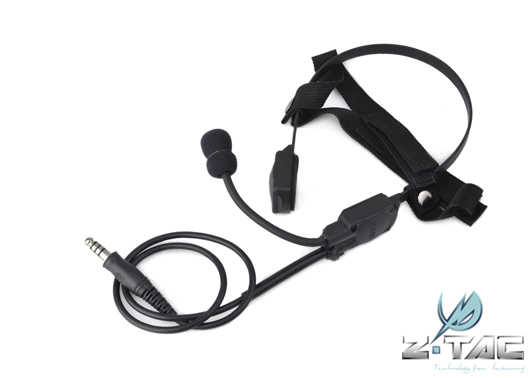 It’s finally here! The highly anticipated MH180V headset replicated by Z-Tactical. Lets do an exhaustive review of it. 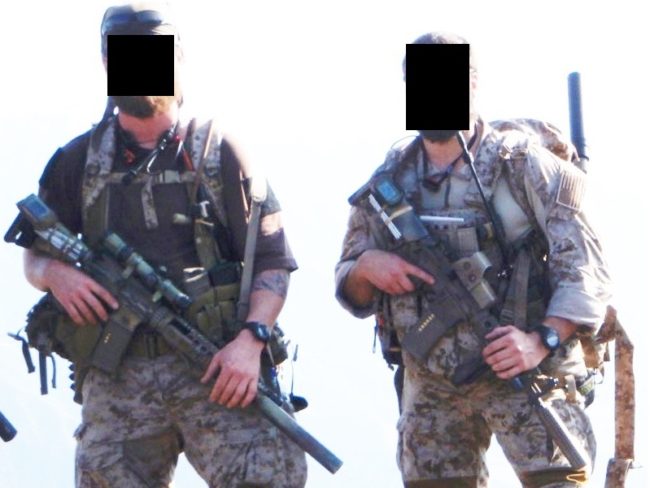 MH180V is manufactured by Atlantic Signal, which products are used by S.W.A.T, FBI or DevGru (operator on the left) among others. Most interesting function of MH180V headset is bone conduction. Sound travels through our skull to our ear bones, that way ears remain free to hear our surroundings.
V is for… vertical, the orientation of the frame. There are three different versions of Atlantic Signal’s MH180V:
-The one on this review, single-comm with military jack for connecting it to PTTS.
-Single-comm with integrated PTTs and specific connectors for different radios (Motorola, 10-pin).
-Dual-comm with two military jack. 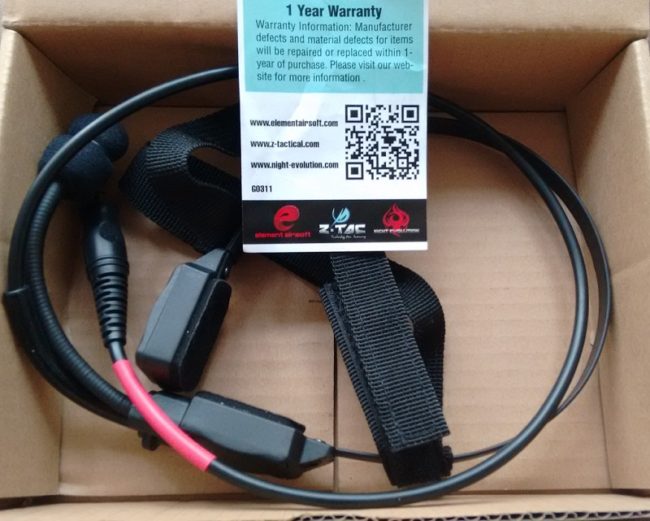 ZTactical MH180V arrives on a cardboard box lacking, with only a small identificator on the upper left (website, product code and product name). Inside you’ll find the headset and an informative paper which says it has a 1-year warranty. It’s a new policy from Element, Z-Tactical and Night Evolution; their products now have a warranty that cover manufacturing or material flaws. We simply have to contact them, sending images or videos of the defect and they’ll send spare parts or a new product.

With the headset out of the box we can apreciatte it’s a simple and lightweight product, as most comms are (except for headsets with integrated hearing protection lik ComTac or Sordin). Basically the MH180V is comprised of two black boxes (containing bone speakers) bonded by a flexible metal frame. The left one features the microphone and cable for the PTT. 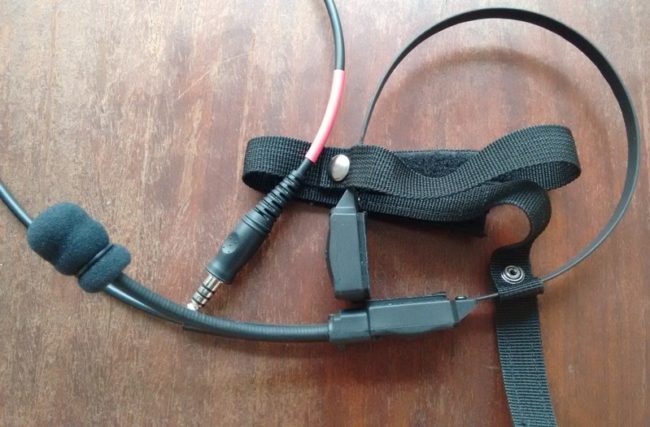 As you can see it’s a very minimalist design and due to that there are few things that could be wrong replicated (but still are). In order to provide a better grip Z-Tac decided to vary the original headband design to make it go all around the head instead of being a semi-circle. 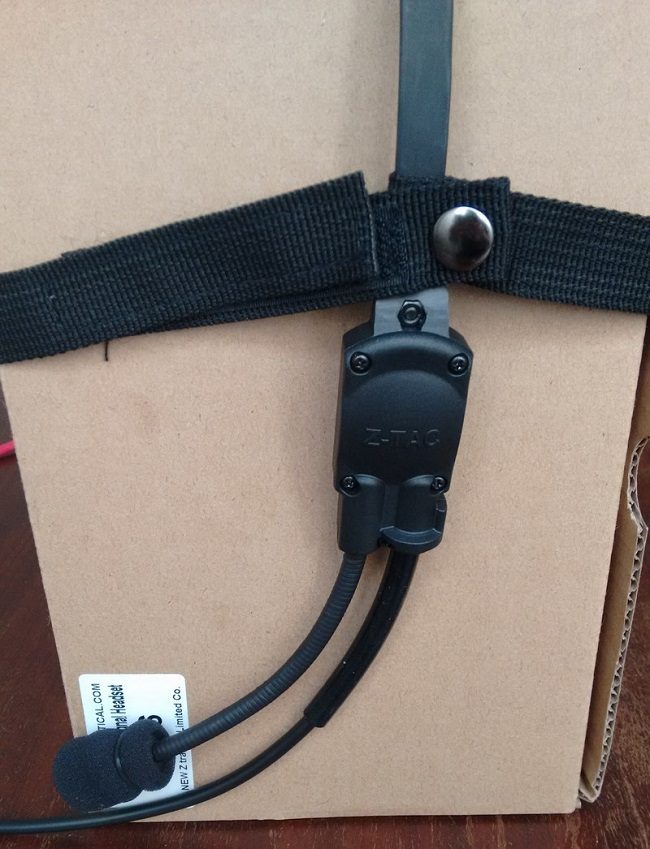 But even being a full headband, it’s not a replica of the sniper/amphibious version. There are differences on materials and looks.

Another difference with the originals are the headband buttons. Z-Tac uses buttons with a silver polished finish while Atlantic Signal chose black amtte buttons to avoid reflections.

How can we correct these errors? 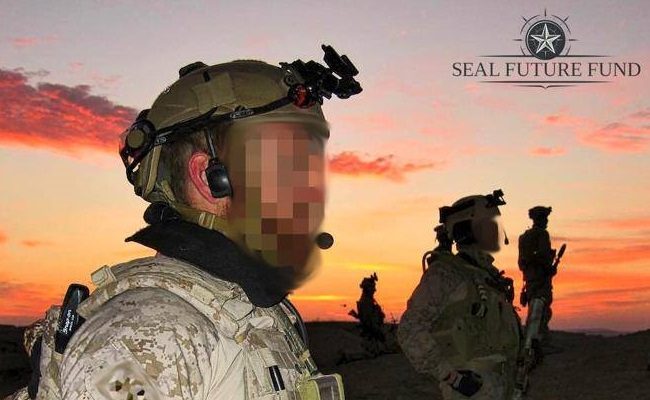 Well, easiest option is just removing the headband like this operator did and the other one on the first pic did, loosing some subjection on the process.

Another option is placing both halves of the band in he rear to get a more similar look.

As for permanent modifications we can cut the band and try to change the buttons. But note that each part has a different size. Bigger one is 17 inches and smaller one is 10 inches long. 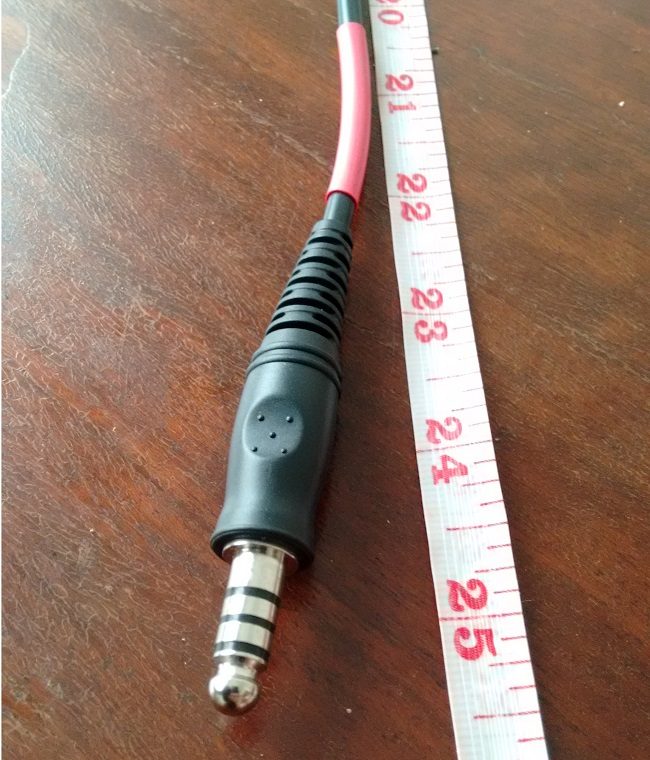 The wire features this red plastic just like the real one does, which is a nice touch. While original wire is long, this one is even longer. At 25 inches it reaches my waist when I drop it. 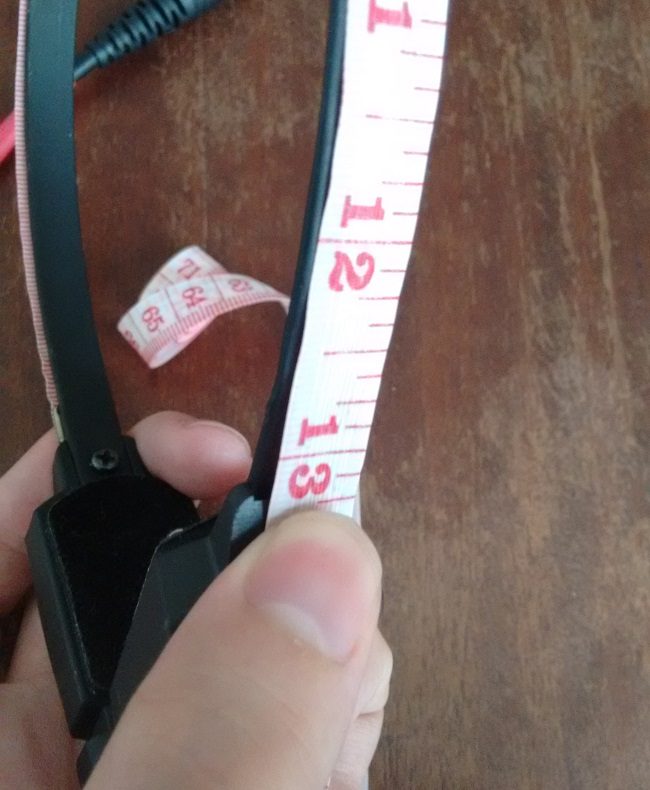 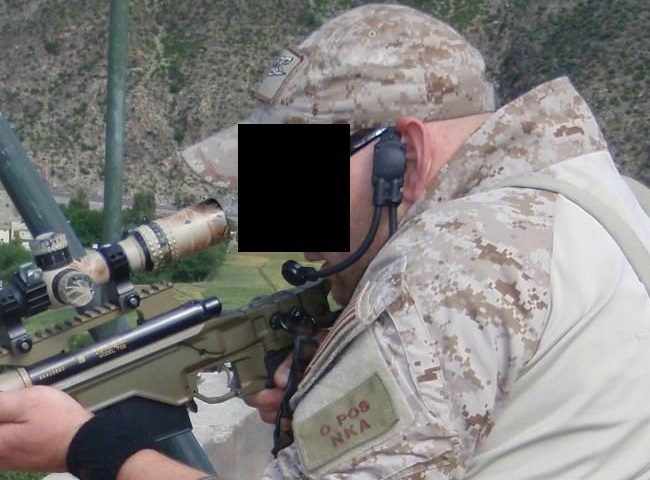 We’ll wear the headset on a way that both black boxes (bone speaker housings) are placed in front of our ears, on the upper jaw.  We can rotate the frame to adjust the length a bit, and then close the velcros. 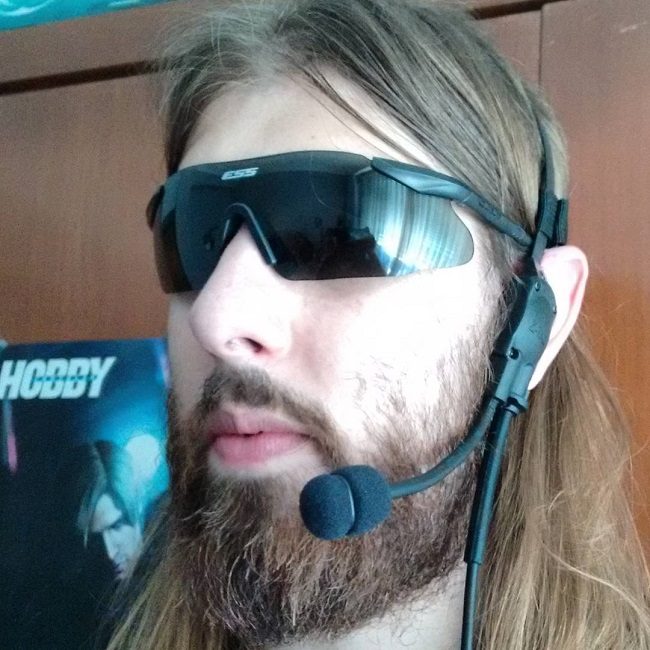 I already explained how bone speakers work, and doesn’t seem the headset or our head vibrate. I guess that vibration is transmitted to the plastic housing and that’s what we hear. Haven’t tried the real ones, but this replica is quite similar to have earphones in front of our ears instead of inside of them. But the important thing is that they do work and we can listen to the radio comms while our ears are free.

Z-Tac MH180V sound quality is good, receiving crisp and clear audio. The fragment of the video was recorded with my phone, it obviously sounds better in real life. 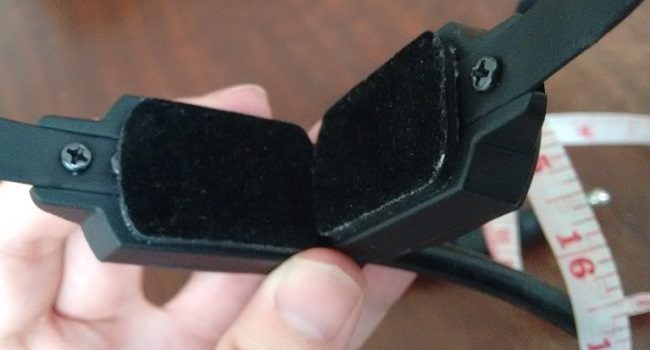 I wore the headset for 3 hours with my glasses and it wasn’t uncomfortable at all. Even when the frame is flexible, the housing isn’t hardly pressed against our head. In fact they feature internal padding for a maximum comfort. Players who wear helmets might find some trouble if the frame sticks out of their heads. 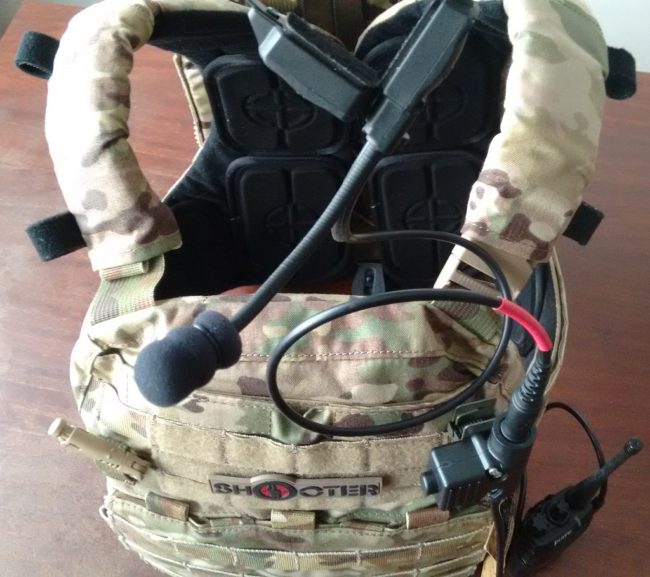 A pic of the MH180V connected to PTT and mounted on my Emerson AVS. As the wire is too long we’ll have to coil it, but that will bend the part next to the connector. And that’s not a good idea as wires might break internally. 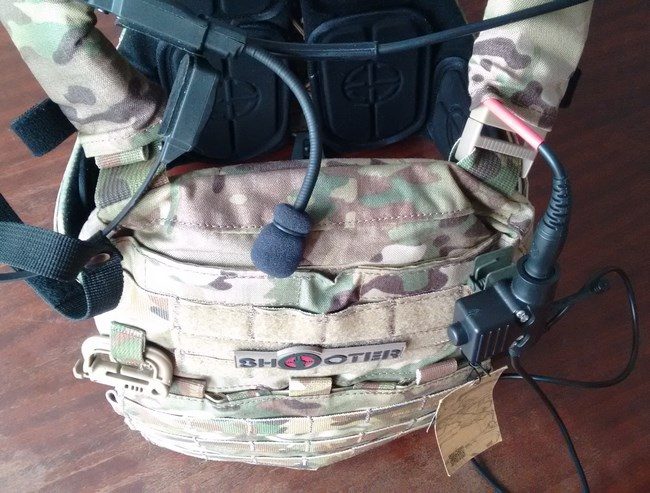 Better to route the wire in a straight manner. Mine could be better placed if I removed the clamp and directly mounted the PTT on the webbing via rubber bands.

Seems that Z-Tac has no plans to release a dual-comm version for now, so we’ll need to mod it if we want that feature. As promised on the first video I opened the MH180V and think it’s doable if you buy a 2nd unit. 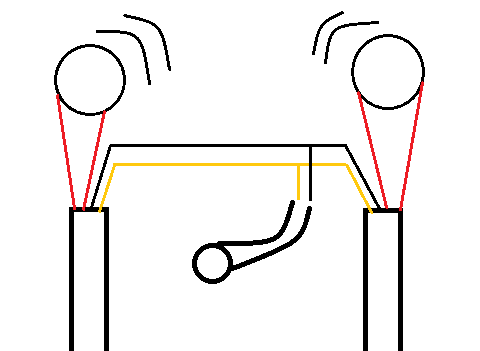 As displayed on this poor drawing, idea is simple: each radio will have its own speaker but microphone will be shared between both.

ATTENTION when opening microphone housing. Microphone is glued and you may torn (as it happened to me) microphone plastic cover. Ideally you should use some solvent. I guess it’s hot melt glue and in that case we should use isopropyl alcohol. 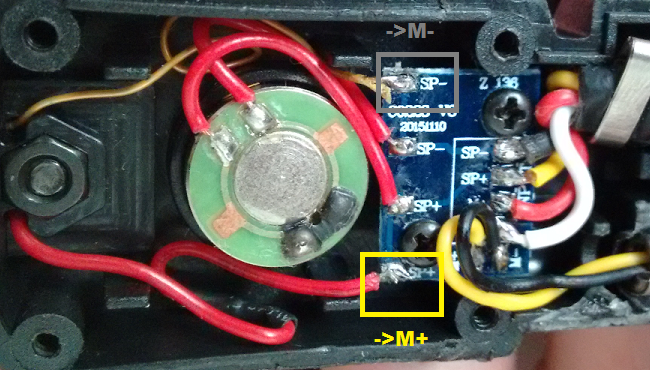 On the main unit (the one where we’ll leave the microphone) unsolder the frame wires (red and brown) which originally went to the speaker (SP+ and SP- on the circuit board). Then solder red wire to M+ and brown wire to M-. We have two places to do so: on the microphone (yellow and black wires) or on the PTT cable (red and white wires). Wire colours might vary. 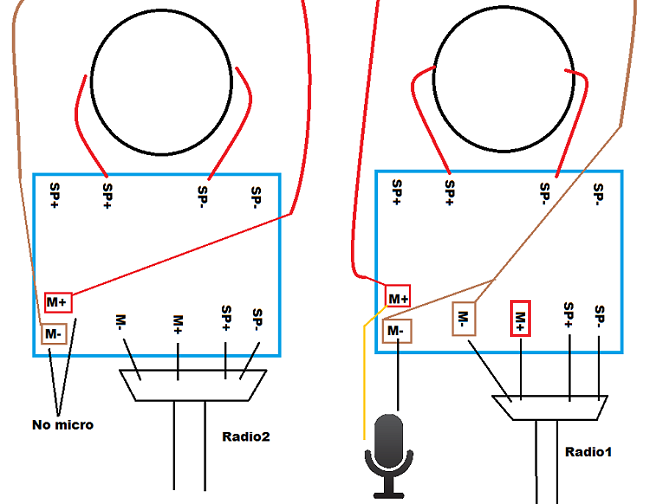 Then remove the microphone of the 2nd unit and weld frame wires on its place. Again red wire to M+ and brown wire to M-. Now we have a separate bone speaker for each radio, but a microphone transmitting our voice to both. Now that you opened the MH180V you might shorten the cable too. 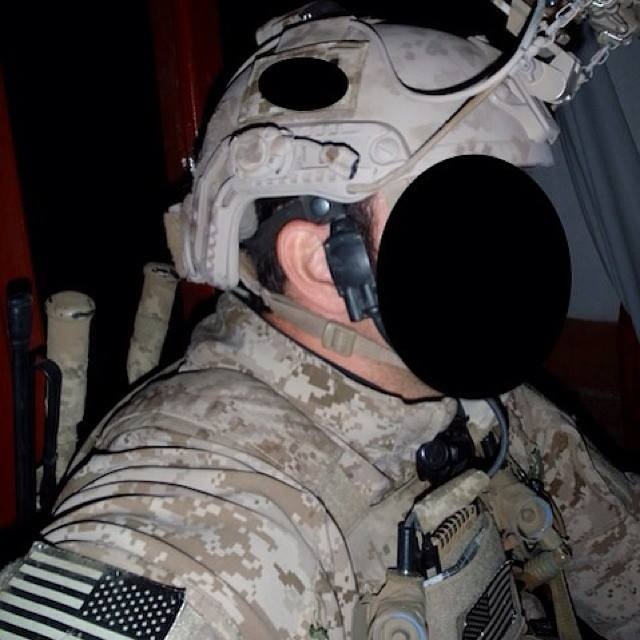 After that we’ll have a dual-comm MH180V just like the one on this pic. At least theoretically. If I decide to try this I’ll upload a more detailed video. 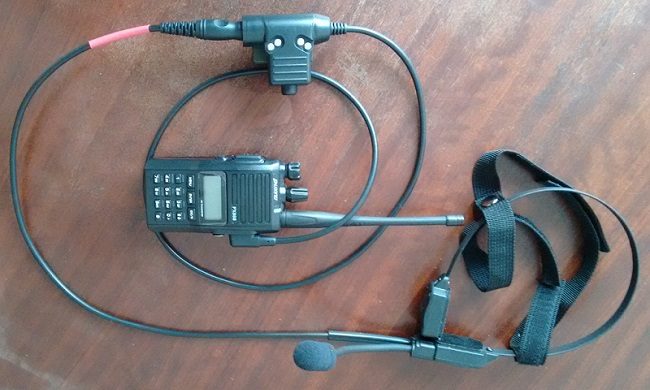 In conclusion we’re before a product that because of its capabilities isn’t only interesting for airsoft reenactors but for all players. While obviously the first group is its target, as an airsoft player who plays on the forest I always liked to hear everything clearly. An enemy approaching silently, leaves being dragged or simply hearing myself to know how much noise I’m producing.

It only has two downsides, the single size and cable length. But it still is a simple, lightweight and economical headset, with an uncommon feature.

You can find it on AliExpress for around 35$


Buy it on AliExpress