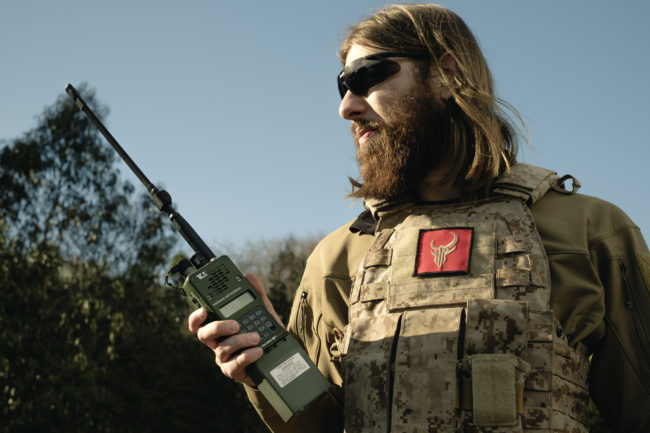 After the video, it was time to make the text review about TCA PRC-152 radio, and it will be extensive too. Let’s go! 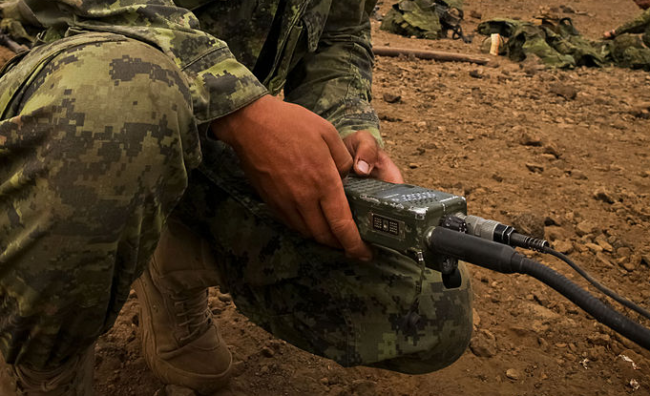 The original PRC-152 is one of the most common persona radios among U.S Mil&LE: FBI HRT, Army SF, Rangers, Navy SEAL…
There are two generations: older one with conical potentiometer and round holes on the speaker, and newer one with cylindrical potentiometer and rectangular holes on the speaker. The older one has been seen with and without the GPS antenna, but the newer one I’ve only seen it featuring said antenna.

TCA PRC-152 radio arrieves inside a plastic hard-case with inner foams, cut on each element’s shape. It’s a 10/10 presentation. Inside we’ll fin the radio, battery case, charger, adapter and antenna which is a short and flexible metal sheet. 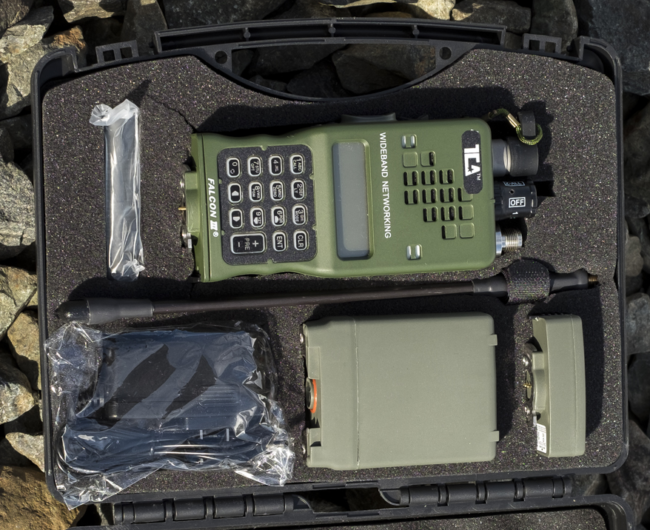 What we miss? That it included a basic headset as chinise radios do to make it usable out of the box, and a programming cable.

TCA PRC-152 is manufactured in machined aluminium on it’s upper half. Bottom half is made of plastic. This implies a slight colour difference between both parts, which gets highlighted when you use a crappy camera. Anyway, this happens with the real one too. 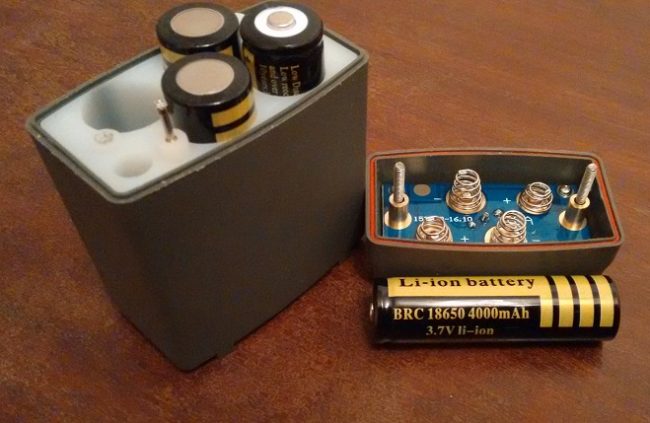 It’s powered by 4 Li-ion 18650 batteries.  They’re connected in series-parallel for a total of 7’4V and a capacity of twice the mAh of a single battery. In my case that would be 8000 mAh, but we all know manufacturers tend to exaggerate a lot.
To install or remove the batteries first you have to remove two screws on the top, then place the batteries in the specified polarity. 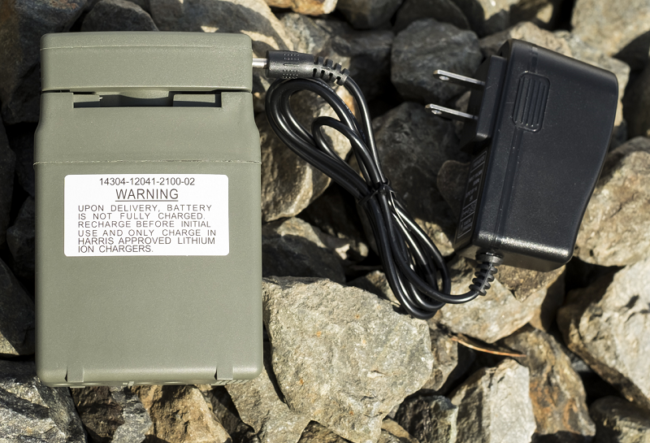 As we saw, TCA included an adapter for the battery case, that way we can charge it without having to dissasemble and take out the batteries. Adapter  also features an USB port to use the battery case as an emergency power-bank. Charger comes with U.S plug. 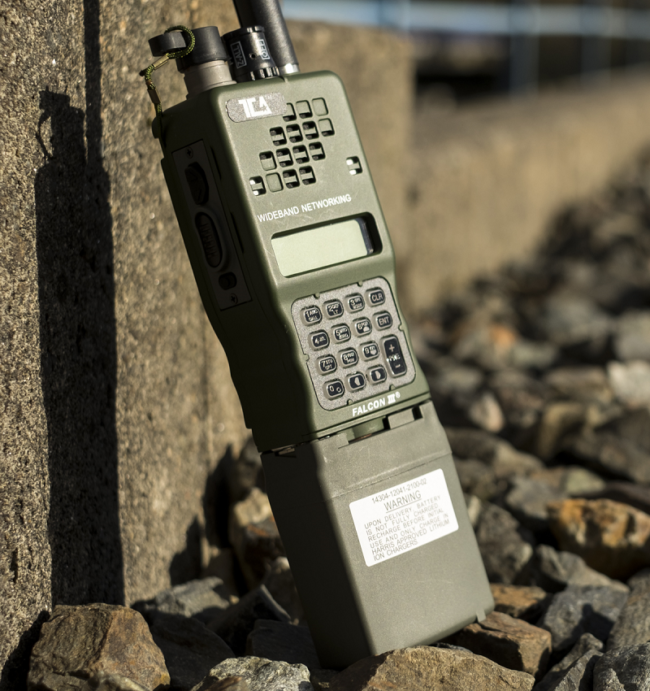 TCA PRC-152 speaker is really loud. On the other hand we have to get very close to the microphone (white rectangle on the left) to transmit our voice. 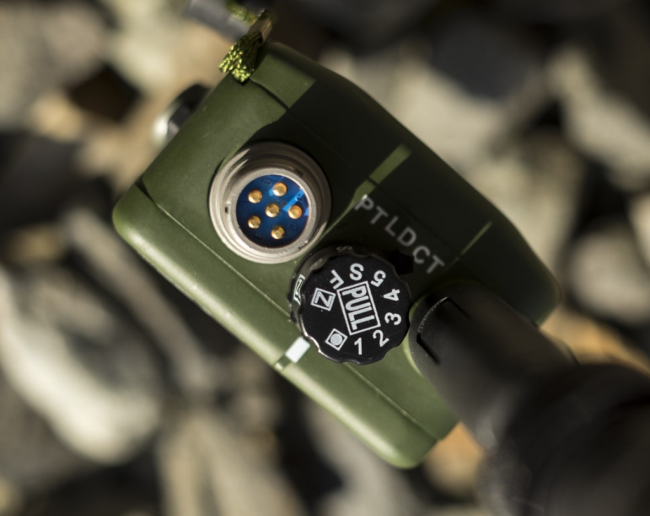 On the top we can find the 6 pin connector for PTTs, antenna threading (lacks o-ring for better seal) and a selector.
This selector is very important because allows us to choose between normal mode (PT), programming mode (LD) and encypted mode (CT). But even if it’s called that way, CT actually stands for voice modulation. Only other TCA PRC-152 radios in that mode will hear our voice correctly. And in the same way, all normal transmissions we’d receive will go thought the demodulating process and become distorted. It isn’t an useful feature because even after modulation messages are easy to understand.

The radio has an up/down button on the left side, used to quickly alternate between the two channels we have on screen. Just like the A/B button on a Baofeng does, with the difference that we know which channel we’re in without looking at the screen.
Under it it’s the PTT button, and then the button to monitor the channel or send DMTF codes.

On the front we have a regular numerical keypad with some additional keys:
CLR: enters the menu.
ENT: to confirm or alternate between channel mode and frequency mode.
◀: keep pressed to enter and exit from FM radio.
▶: keep pressed to lock and unlock the keypad.
+/-: for navigating between menus, channels or frequencies.

I explain all 38 menus on the video, but will write about them on a separate post.
You can fin the user manual in J.K. Army’s website.

Frequency range of the antenna goes from 136MHz to 520MHz. And although it says 8MW, it actually transmits at 5MW.

On the LCD screen we can find many indicators that provide information about the different configurations. Most relevant info are the channels we’re using.

Someting I really liked about the radio is how intuitive and user-friendly it is. For the basic settings at least. Switching between two channels only requires to press the up or down keys on the left side. Then input the frequency or channel number.

As the radio arrives without batteries, buying extra battery cases is cheaper and faster because it can be shipped by airmail. Then is up to us which batteries we buy and put on it.

IP code 7 indicates the radio can be submersed up to 1 meter for 30 minutes without water entering inside it. IP tests are stationary, any movement changes the dynamical pressure might cause water to enter. Understand this IP level as “it can get wet, but don’t go swimming with it”.

A key point of all communication systems. TCA is fully compatible with TRI products, and can also use Z-Tac headsets and PTTs via different adapters.

Compatibility with real headsets is provided by MIC.MD menu. Original headsets typically use moving coil microphones which are too low to be audible on other systems and require amplified PTTs. Activating the MIC.MD option TCA radio will do that amplification without needing to spend 100$ on a PTT. Just like FALCO and TRI PRC-148 radios do. 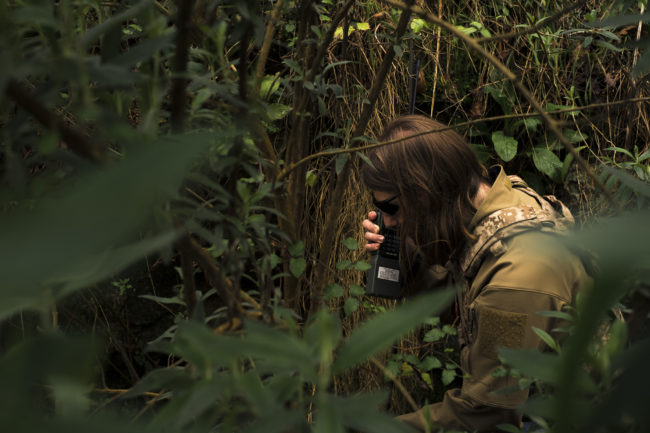 Maybe the only defect of this radio is that it doesn’t replicate the PRC-152 radio but a different Harris model. This TCA version lacks the GPS small antenna (which should be available soon), and the cylindrical rubber antenna (you can buy the TRI one).

This is the radio for reenactors or players who want to use functional replicas of the gear operators use.  It’s also for all of you who think a Baofeng or Puxxing aren’t enough for your needs or are competent with radio-stuff. 200$ isn’t a cheap price to amortize. We also have to consider the weight and volume, Baofengs extra batteries offer a better capacity/weight ratio.

Some things I didn’t like: it’s really easy to scratch it and I recommend you putting it inside a pouch as soon as it leaves the box. The speaker makes a cracking noise when using the keyboard; use headsets or disable the key beep to avoid it. And finally, it’s a bulky radio. Get an specific pouch for it.

Evaluating the price we need to take compatibility into account. Being compatible with real headsets that’s 50$ in amplified PTTs we can afford. We obviously could replace the original microphone with an electrec for 1€, but spending 200$ on a pair of original Comtact just to open and cannibalize them makes baby Jesus cry.

The things I liked: it’s manufactured in aluminium like the real one, battery cases not including batteries and knowing the battery voltage when we turn it on.

And above all that I liked how easy to operate it is. My other radio is a Puxxing 888D and I never delved into its features because I had to memorize key combinations. TCA PRC-152 has a button for each thing.

While very similar to TRI, I prefer the TCA. TRI is made of plastic, and TCA radio has a more informative screen, it’s easier to use and has more config menus.