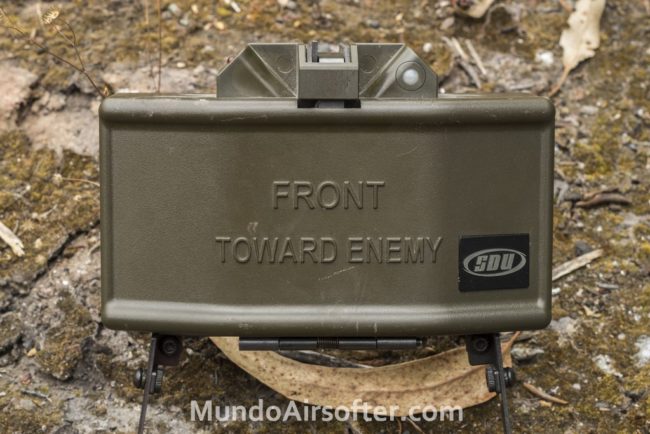 SDU Tactical sent us  their reproduction of the M18 Claymore Landmine for reviewing and sharing our thoughts about it. And once again I made a video review, audio is spanish with english subtitles. 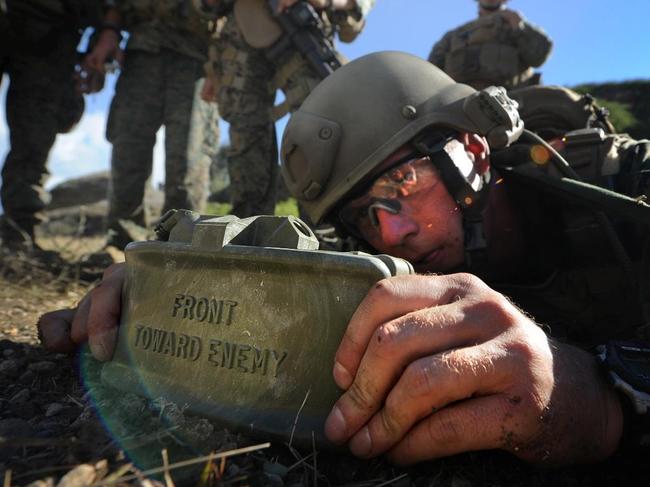 Claymore are, without a doubt, most famous landmine models. It started service in 1960 with Vietnam War being its first conflict, and is still used nowadays which is indicative of great design and performance. Normally used to setup ambushes and as an anti-infiltration against infantry or unarmored vehicles. Because it contains C-4, blasting caps can be detonated by any device that sends an electrical charge such as sensors or timers, but they’re rarely used. Most of the times Claymore is manually, by 100ft wire and M57 clacker. 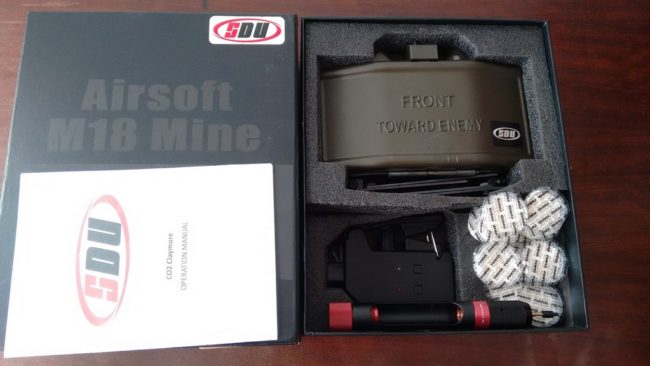 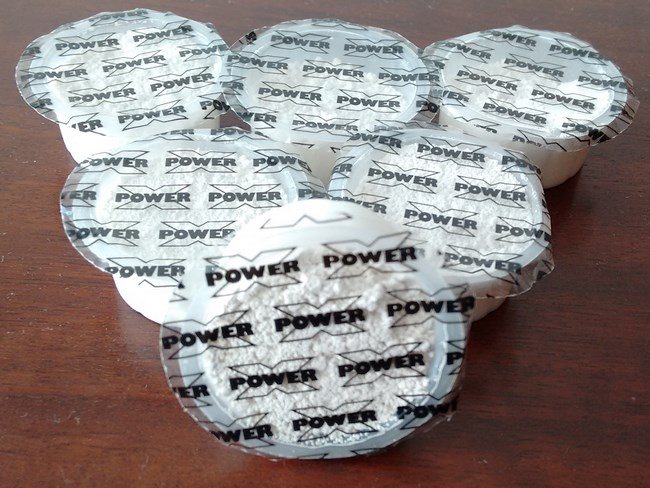 Unlike others, SDU Claymore it’s not designed to launch BBs (although it can do it too) but for releasing a cloud of talcum powder using CO2. We’ll use a 12g cartridge adaptor to load CO2 in the launching unit. Each CO2 cartridge refills launching unit at least 8 times, that’s the most I’ve used the Claymore during the review. 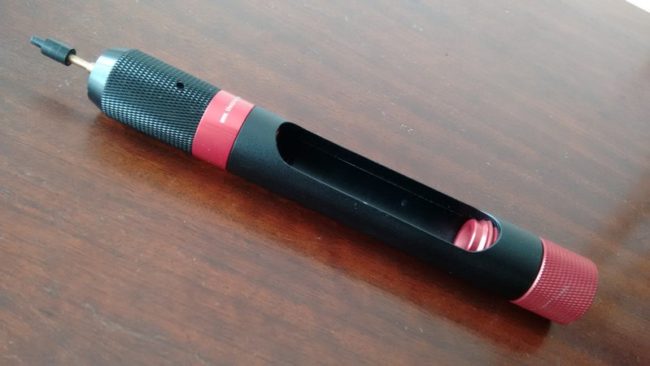 Adapter from picture is made by SDU, it is a very straightforward and economic model (no manometer). Unfortunately  for me it was faulty, I exchanged some emails with SDU and after making sure it was a problem of the item (an not a dumb user) they sent a new one.

Average reach on SDU Claymore is around 1.5-3 meter / 5-10 feet (affected by wind), shorter than 20 m / 65 feet BBs Claymores promise.  The good thing about SDU’s one its the increased durability, as BB launcher elements suffer a lot of wear and tear and require reparations.

And as stated before, some people attempted to launch BBs with this Claymore, reching around 10 meters/30 feet. For that we’ll load BBs in place of powder caps, covering them with some plastic to reach a reasonable pressure.

Like other Claymore versions, it can be detonated manually and wireless with the Clacker, or by tripwire. But best feature of SDU Claymore is the automatic mode, detecting heat sources to explode when a player walks near it.

Weighting around 1.6Kg / 3.5lb it’s externally built in fiberglass and nylon, providing it a tough construction. Internal parts are made of metal and plastic. Size and weight both limit carrying options, here are some of them:
-Surplus bandoleers like M7 used in Vietnam.
-Pouches and other modern options like cool Magupul Happy Claymore Bag.
-Buttpack or backpack, where there’ always room for stuff but slower access.

One defect of the landmine is the multiple times it beeps to tell us what it’s doing:
-Claymore beeps when we power it, although we’ll do this at the beginning of the game.
-When we switch on the remote, both remote and mine beep if they detect each other.
-After choosing an operating mode, both items beep.
-And last, it beeps after exploding. Although that one is useful.

After emailing SDU, their explanation was that the beeping sound can be used to locate the Claymore with the remote control. Sincerely, I’d never leave an item worth over 100$ unattended.
The only time mine doesn’t emit sound is when using tripwire, as it doesn’t require batteries or when we choose manual mode before leaving respawn. We could choose automatic, but it will probably explode while we plant it. 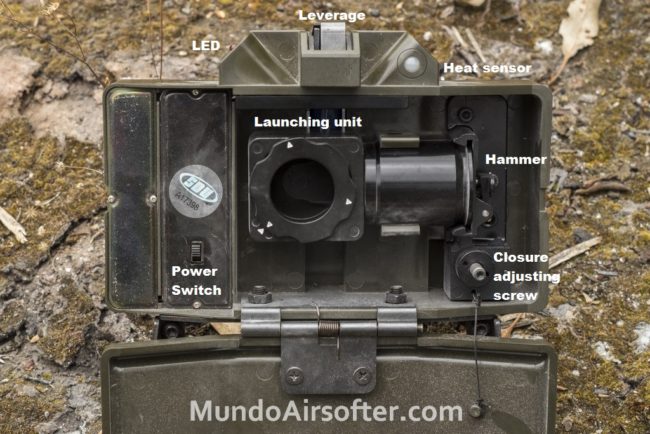 First thing to note about operating the SDU Claymore: learning curve is steep but short. After making some mistakes the first attempts you’ll get used to it. But don’t be a moron like me and try to operate it without someone/something explaining you how to do it. 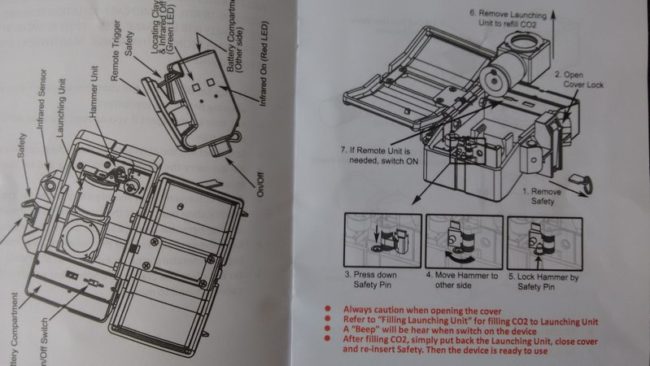 Instructions are more or less clear, but I’m going to list all steps and trouble we might find. 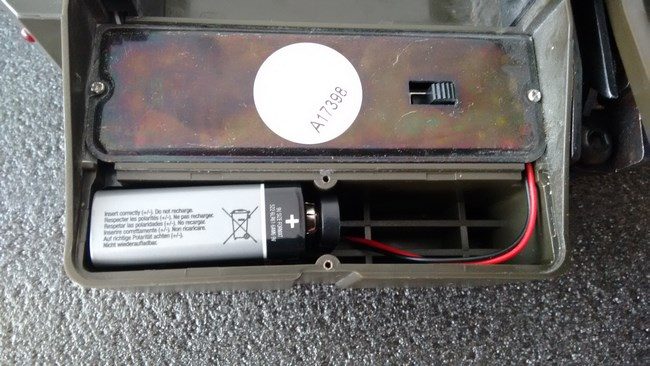 SDU Claymore mine is powered by a 9V battery, located on the left after removing 2 small star/phillips screws. 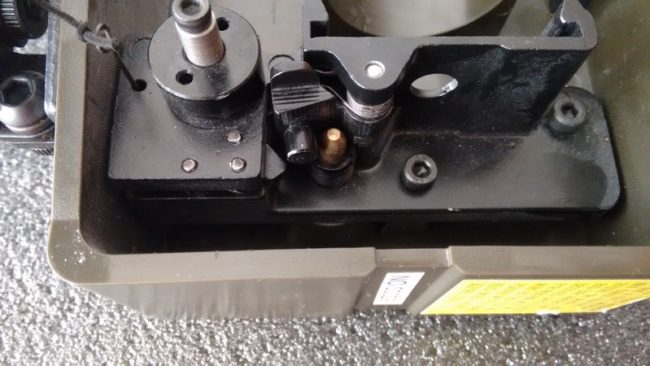 On the left we can see the closure adjusting screw. It allows use to regulate the closeness of the door when closed. This will affect how early/late the launching unit explodes and therefore the dispersion of talcum and BBs. For example, it could detonate while the door isn’t fully open, covering the interior of the mine.

Next to it is the hammer, we have to retract and secure it with the rear safety pin. Launching unit is mostly identical to a 40mm grenade. 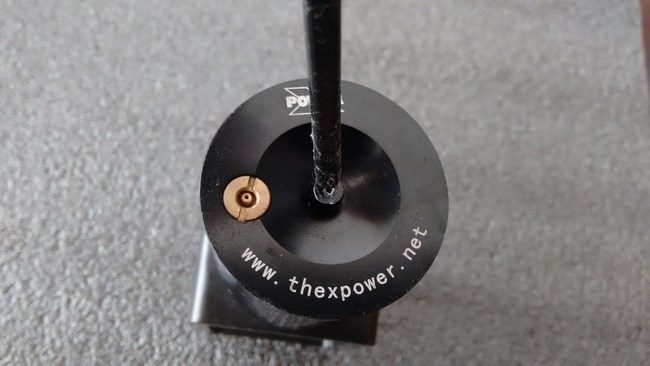 With launching unit outside Claymore, we’ll press the firing ping until we hear the click, with a screwdriver or any tool long enough. Now it’s ready to be filled with CO2. This launching unit is designed to work with elevated internal pressures such as CO2. If we try to fill it with weaker gases like Green Gas, internal pressure won’t be high enough to close the valve and it will leak. So worry not if this happens to you, that’s normal and your launching unit isn’t faulty.

But it leaks while using CO2, don’t panic yet. Normally that’s because it wasn’t properly filled. You might have charged a small quantity of CO2 that wasn’t enought to close the valve. In that case just press the valve with your nails to slowly release CO2 and try again to refill the launching unit.

Continuing with pressures, strong gases like Red Gas have an internal pressure high enough to stay inside launching unit without leaking. Without caps, this will allow us to use the Claymore as a sound landmine. Red Gas pressure isn’t enough to break the cap and propel the talcum powder. 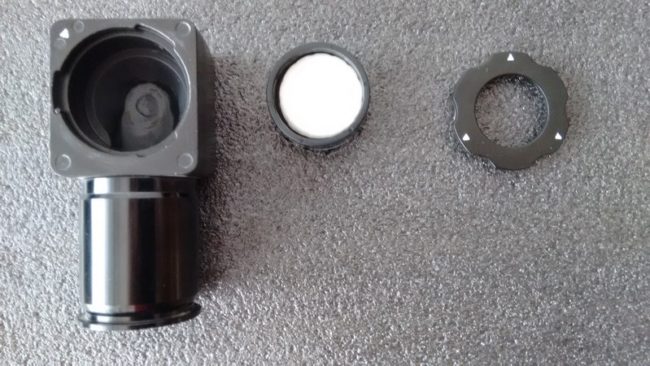 After loading the launching unit we’ll introduce the powder cap upside down, followed by the plastic cilinder and the locking ring. We’ll rotate it until both white triangles are aligned. Put the launching unit back inside the Claymore, switch it on, close the cover and lock it by gently lowering the upper leverage. Pressing down the leverage with an excessive amount of force might prevent the Claymore from opening.
That happened to me on last tests, but didn’t on the first ones. Maybe I’ll have to adjust the closure screw. 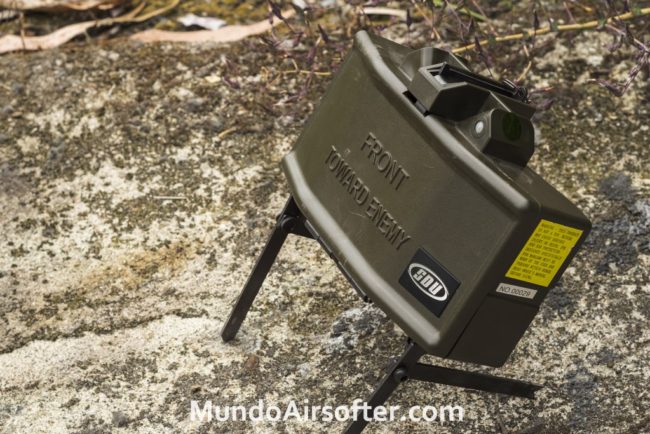 With Claymore prepared it’s time to deploy it on the field. We’ll spread the scissor legs and nail them to the floor. On the side you can see a sticker with the serial number. 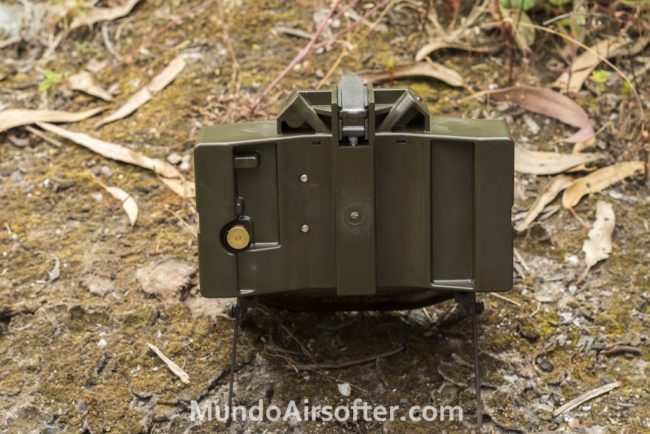 Remove upper safe-ring and give Claymore some angle for a better reach while checking it doesn’t open unwittingly. Then remove rear safety. 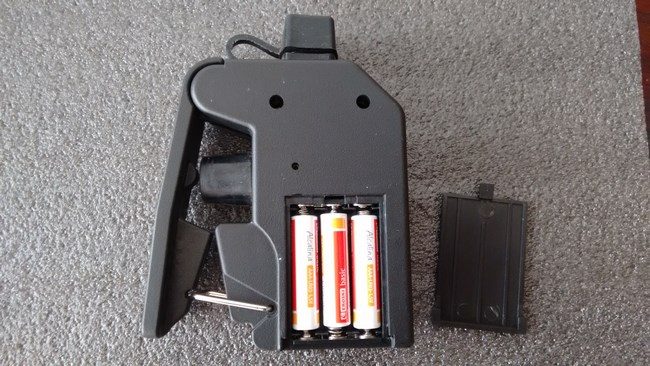 Now it’s time to operate the remote, powered by 3 AAA batteries, power button is on the top protected by a rubber cap. Next to it there’s a retractable antenna on for increasing range (30 meter / 100 feet reach). 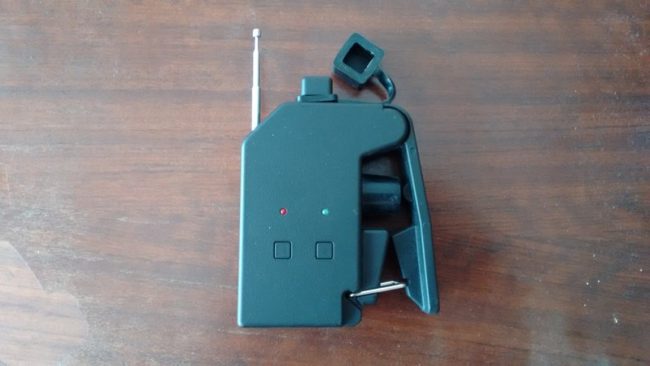 On the front there are 2 LEDs with 2 buttons under them: red for player detection and green for manual detonation. Detonating lever is on the side, secured by a metal safety. 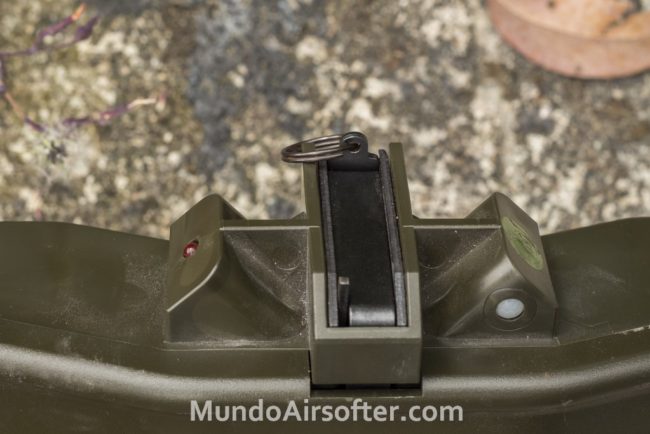 Choosing automatic mode, Claymore will blow up when a player walks in front of it. That’s achieved by the sensor on the upper part, it detects heat sources as human body by infrared emissions so an inanimate object won’t trigger it. SDU specifies a 6 to 16 feet (2-5 meters) detection range and in my indoors tests it was always triggered at exactly 6.5ft (2m). I think that’s the best distance because it more or less concurs with powder dispersion.

About remote range, I’m guessing 100ft is for optimal conditions: fully extended antenna, line of sight and no obstacles. I’ve tried it from one point of my house (inside my room) to the farthest (small outside yard) which is around 50ft (15m), with thick walls and doors, and SDU Claymore works perfectly. So reaching 100ft outside doesn’t sound unlikely. 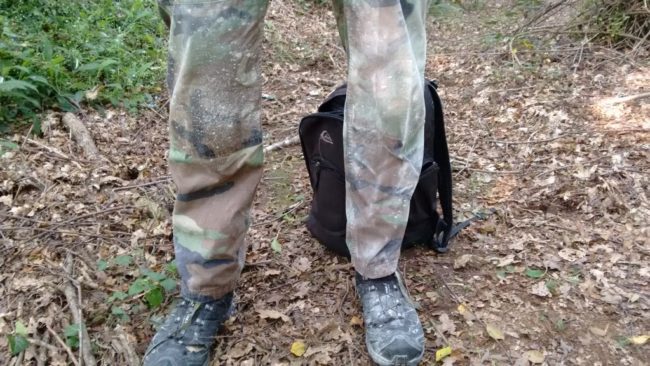 That’s the result of walking in front of the Claymore 3 times. My legs and boots received a good amount of powder. 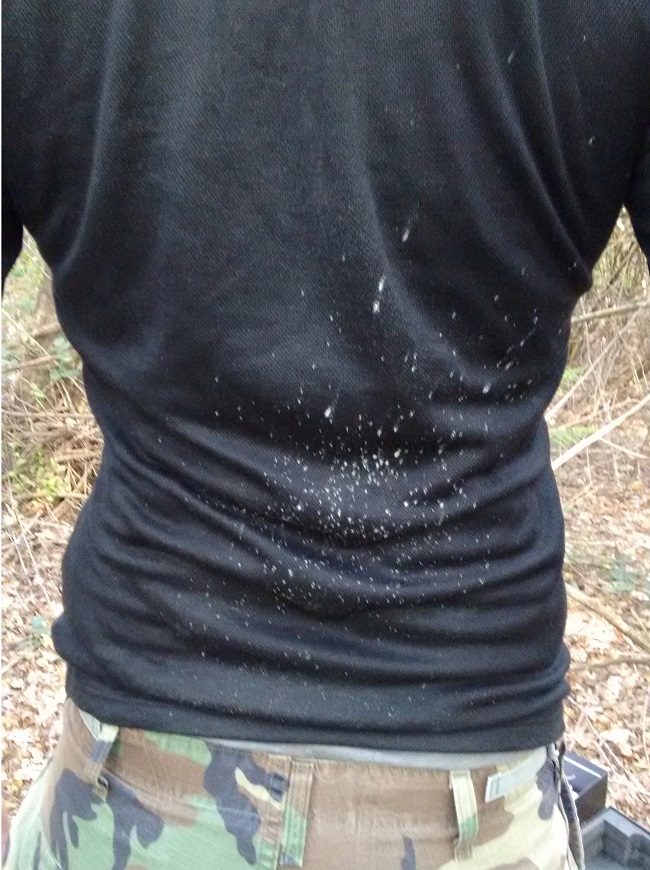 This picture was taken before the first detonation. As I walked parallel  to the mine I caught some powder on my side and back. 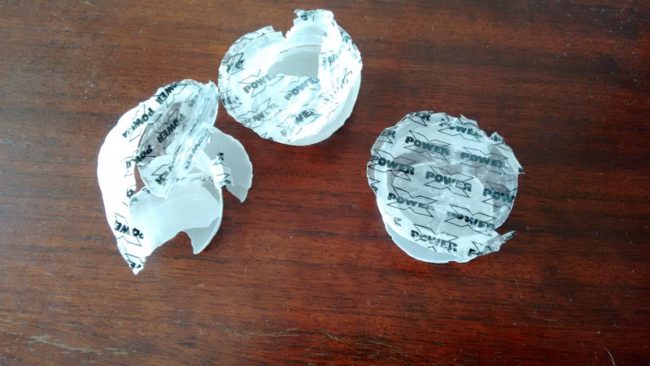 During the explosion you can see on the video how the powder cup flies away, so we’ll have to recover it. They usually break into smaller pieces and finding them could be tedious. But as airsoft players who use bio ammo, we have a commitment to the environment. To leave it better than how we found it.

First purpose that occurred me, thanks to the detector,  was using it to protect our rearguard when we’re stationed on enemy territory. Something that snipers will find useful. Problem as I stated is the beeping noise can reveal our position. That’s why I’m considering removing the speaker.

With regard to manual mode we can use it to set ambushes or protect rooms in CQB. Plus, it also provides a way to disable vehicles without shooting BBs at them.

Last we have the tripwire mode, the stealthiest one as it doesn’t require batteries and therefore doesn’t make sound. We could attach it to conquerable items such as flags or ammo boxes so the Claymore explodes when someone tries to steal them.

SDU Claymore can also be used as sound grenade, either by loud explosions with hi-pressure gases like CO2 and Red Gas. That will reduce the reusing cost as each powder cap has a price of around 0.80$. 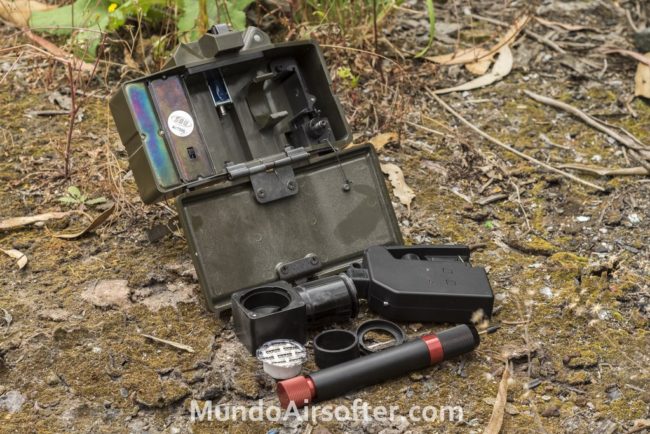 SDU Claymore cost practically the same as other market options, yet it does more. And it’s also cheaper than when it was sold as XPower (for around 280$). Both are reasons good enough to consider buying it.

It’s true that taking advantage on an airsoft Claymore isn’t easy. And perhaps it shines most on longer games or with more elaborated missions where successfully ambushing a convoy can alter the course of it.

So, when I say it’s a recommendable product, I’m speaking to all player interested on one, as I think this is currently the best Claymore on the market. Obviously Claymores aren’t the most adequate purchases to people with incomplete loadouts, lacking more priority items such as communication systems.

Abaout SDU’s CO2 adapter I said it came faulty and they sent another one. As it’s sold separately, I’ll leave at the discretion of each player if investing on one.

You can find the SDU Claymore on european retailers, which will afford paying custom taxes. 40$ / 35€ in my case. On said retailers we’ll also found spare powder caps for when we run out of them. Please, keep in mind retailers usually sell the Claymore with only 2 powder caps, while SDU provides 10.

Last, these are the links to buy it on SDU Tactical website.

5x Claymore with 100 caps and 5 adaptaders


Buy it on SDU Tactical