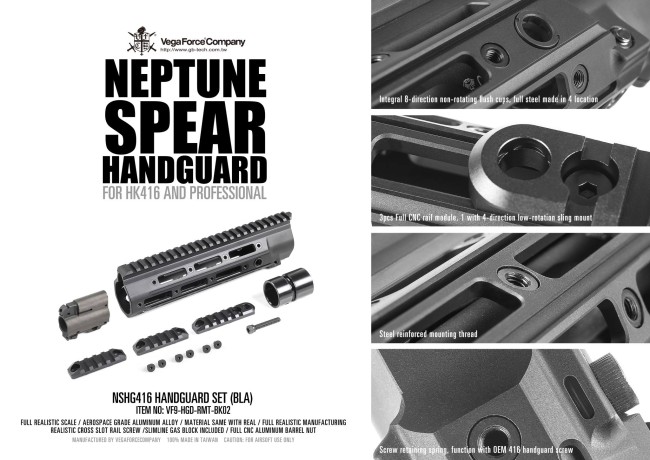 Hooha Show 2016 was a few days ago and yet Vega Force Company has more things to reveal.  This is the VFC Neptune Spear Handguard (VFC NSHG).

This VFC handguard wil be the first replica of the Remington RAHG handguard used by the DevGru operator who shot Osama Bin Laden during Neptune Spear op, hence the name. The main difference with the rest of reproductions is the location of front QD sling attachment points (on the bottom, instead of the top part).

And for those who aren’t concerned about reenacting or impressions, this VFC Neptune Spear handguard will probably fill the gap between DyTac (reduced price, bad quality) and SGT (top quality and expensive).

The details of the VFC Neptune Spear handguard are the following:

–Made of aerospace aluminum grade alloy, same materials as the real one from Remington.
-Modified gas block included with sling attachments removed. That’s a point I really like, no permanent modifications are required.
-Three aluminium rail sections (CNC, not die-casting), one with QD sling attachment.
-Steel reinforced mounting screws for rail sections.

VFC Neptune Spear handguard finish seems to be anodized and lacks Remington Defense markings, as you can seen in the pic, this first version doesn’t seem to have them. But I’m sure some stores will engrave and sell them for an aditional cost.

As the picture says BK02 on the product number it can be assumed that there would be multiple versions. Remington manufactures the original HK416 RAHG in two colours: black anodized and FDE Cerakoted; and in two lenghts: for 10″ barrels (like this one) and for longer 14.5″ barrels.

VFC’s NSHG will hit the market this weekend so we’ll know in a few days the final versions offered and the price (which I estimate around 150$).

Update: Retail price is 170$, it’s a considerable peice ofr a handguard, but still a good one compared with other alternatives.

It’s always good news when new replicas of  Heckler&Koch Hk416 accesories get realeased, increasing options to customize it and have more diversity between our builds.

As always, I recomend you my guide AOR1 Loadout: Weapons (in spanish) to learn what accesories use on a DevGru HK416 build.