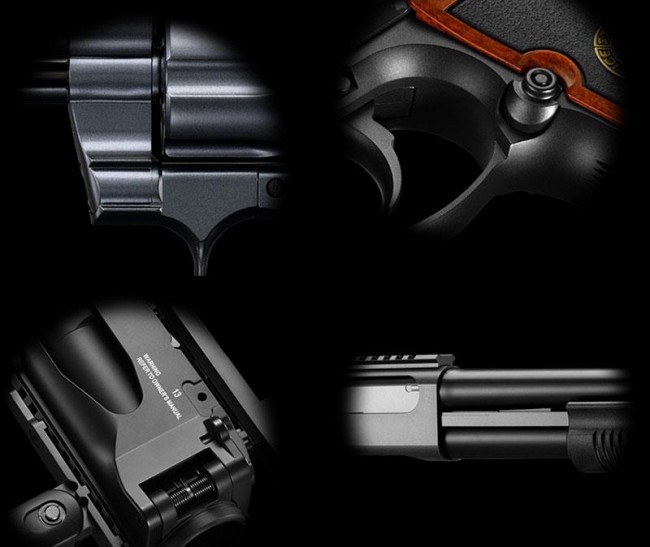 May 16th is the beginning of Shizuoka 2013 Hobby Show and like every year, Tokyo Marui brings us this teaser picture of the products they will be showing there. Let’s try and find what products are this pictures from.

First we have a revolver. Possibly a Colt Python as Tokyo Marui is continiously adding variants of their existing revolvers.

Second pistol is the Samurai Edge, the custom Beretta used by S.T.A.R.S in Resident Evil saga (Biohazard in Japan). It was already announced by  Capcom and will hit the markt this summer.

There one isn’t really new. It’s the M320 grenade launcher Tokyo Marui already showed last year on their HK416. Note the gas valve on the grip.

And last, there’s a shotgun, most likely a Remington M870 variant either gas blowback or tri-shot spring action.

So there’s really one actual new product on the teaser but don’t forget Tokyo Marui will be announcing their “New Dimension” line of guns. With a price of 50000 Yen (390€ or 510$) it would be rather expensive for a shotgun (even with shell ejection system) so Tokyo Marui has an ace up sleeve. Will we see the M&P or HK45 pistols? I bet no…