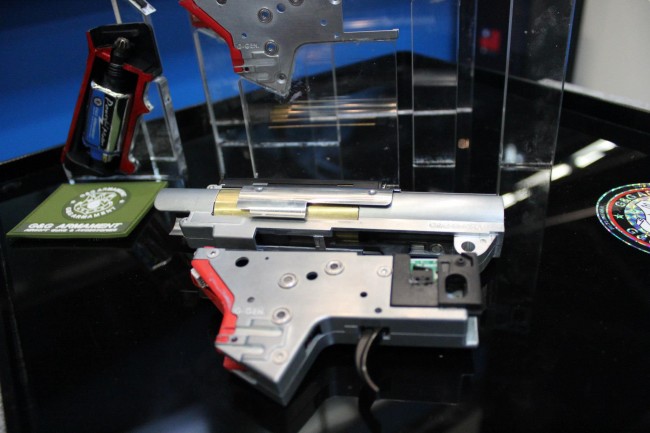 Seems that the current trends is updating the gearbox design. We’ve seen the Katana Gearbox made by WE and Airsoft Systems ASCU.

In this first video G&G shows us the field strip similar to a real one: remove rear pin then open the body.  Upper half of the gearbox comes out by pulling the charging handle.  Note this gearbox seems to have G&G’s blowback system.

Lower half is much more interesting. It houses a micro switch with the electronical parts, a 4 position selector with free 360º rotation (safe, semi, auto, burst) and a totally new pistol grip desing which allow us to remove it (and motor inside) in seconds just by opening the trigger guard.

This second video shows G-Box in a more detailed way. Micro switch (gun’s “heart”) will feature a stand-by mode: it’ll detect when we forget to unplug batteries and start the “sleep mode”. And as a cool feature we’ll have to pull the charging handle every time we feed a new mag. Gun will also detect when it’s opened to disable motor and thus avoiding user to break gears or other troubles.

On the G-Box you can see some red colored zones. It’s new G&G color code used to quickly identify the upgrades: Green for standard, red for higher FPS and yellow for higher ROFs.

Hope we get a full demostration of this interesting new gearbox design, specially the “functional charging handle” feature.